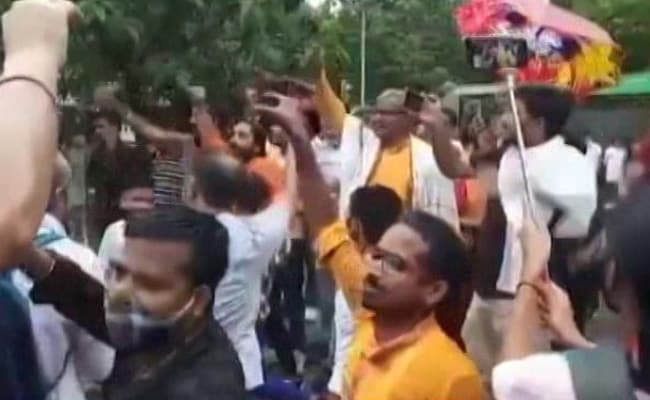 The march was reportedly organised by lawyer and ex- BJP spokesperson Ashwani Upadhyay.

A video allegedly from a march held at Jantar Mantar in the heart of Delhi on Sunday has gone viral over egregiously communal slogans raised at the event that the police say was held without permission.

The march was reportedly organised by Supreme Court lawyer Ashwani Upadhyay. He says he is not aware of the video; only five or six were shouting slogans, he said, adding that such slogans should not have been raised.

In a video that is in circulation on social media, slogans threatening Muslims while shouting “Ram, Ram“.

“Hindustan mein rehna hoga jai shri ram kehna hoga (To stay in India, must say Jai Shri Ram),” shout members at the rally held at one of the most prominent protest sites in the nation, just a few km from parliament and top government offices.

The Delhi Police has filed a case and is trying to identify those in the video.

The slogans were shouted in the presence of Narsinghanand Saraswati, a priest notorious for hate speeches.

The police say the event had not been allowed on account of Covid rules.

The incident was raised in parliament today by AIMIM MP Asaduddin Owaisi.

Mr Owaisi said in the Lok Sabha that “genocidal slogans” were raised against Muslims and no action has been taken against the participants.

The Hyderabad MP targeted Prime Minister Narendra Modi and said such slogans were raised at Jantar Mantar, which is 20 minutes away from the PM’s residence.

“After all, what is the secret of the growing courage of these hooligans? They know that the Modi government stands with them. On July 24, the Central government under National Security Act (NSA) had given the Delhi Police the right to detain any person. Yet the Delhi Police is quietly watching the spectacle,” Mr Owaisi said.