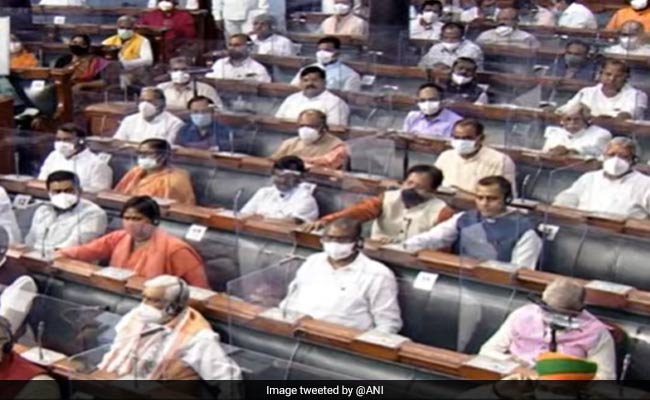 Congress MP Manish Tewari has suggested that the Opposition consider bringing  a vote of a no-confidence motion against the National Democratic Alliance (NDA) government as the stalemate in Parliament continues over the issues including farmers’ agitation, Pegasus issue and COVID-19 mismanagement.

More than Rs 133 crore in taxpayer money has been lost because of Parliament disruptions in the monsoon session, government sources said last month.

Prime Minister Narendra Modi has attacked the Congress, accusing it of not allowing the monsoon session of parliament to function, and asked BJP MPs to “expose the party before the public and the media”.

The Monsoon Session commenced on July 19 and is scheduled to continue till August 13.

Here are the LIVE updates of the Monsoon Session of Parliament:

Lok Sabha adjourns till 11.30 am amid continued sloganeering by Opposition MPs in the House.

Opposition Parties to address joint presser shortly. Opposition parties have decided to cooperate with the Centre to pass the OBC Bill in both houses.

As the logjam in Parliament continues over the issues including farmers’ agitation, Pegasus issue and COVID-19 mismanagement, Congress MP tweeted, “Since NDA/BJP Govt is showing a level of obduracy unwitnessed before in annals of Parliamentary Democracy by not discussing l”affaire Pegasus, Farmers agitation and COVID mismanagement joint opposition should seriously consider bringing a vote of no-confidence against NDA/BJP Govt.”

Delhi minor rape case: AAP’s Sanjay Singh gives zero hour notice in Rajya Sabha
Aam Aadmi Party (AAP) MP Sanjay Singh on Monday has given notice in the Rajya Sabha to raise the issue of the alleged rape and murder of a minor girl in Delhi during the zero hour.

Mr Singh in his notice has also raised the issue of the law and order situation in the national capital.

On August 1, a 9-year-old girl was allegedly raped and killed by a priest and three employees of a crematorium near the Delhi Cantonment area in southwest Delhi.

Terming the Pegasus spyware issue ”a matter of grave concern”, Mr Tewari stated that ”reputed agencies” like Citizen Lab have found traces of the spyware on some of the devices that were attacked.

“Reports have pointed out that the Government of India has procured the surveillance tool Pegasus developed by Israeli company NSO Group for surveillance of Journalists, Civil Society Activists, Politicians and Supreme Court Judges. Since the NSO group”s policy is that clients are confined to the vetted government only it suggests that the spyware was used by the GoI and not any other private body,” the Congress MP said in his adjournment motion.

“It should be noted that this kind of surveillance classifies as hacking, which is what spyware does and it would very much qualify as unauthorised interception or hacking as per Information Technology Act, 2000. The fact is that the government has not categorically denied that Pegasus has been used officially. Sir this is a matter of grave concern and therefore I wish to raise the same,” he added.

Bills for consideration and passing

This Bill has a provision for stake sale of government equity in LIC.