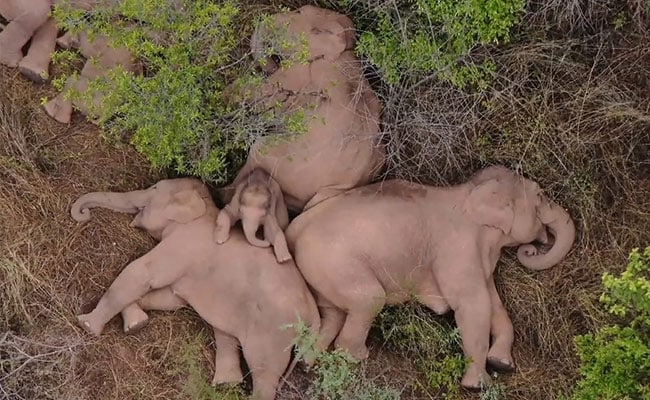 A herd of wild elephants captivated millions across the world with their long trek. (Image Credit: AFP)

An elephant herd that captivated millions with their yearlong journey across China appears to finally be heading home. The herd of 14 Asian elephants made international headlines with their long trek through southwest China, during which they raided farms, houses and even a retirement home in search of food. It is unclear why the wild elephants strayed so far from their habitat in the Xishuangbanna National Nature Reserve in Yunnan province – but it appears they are finally making their way back home.

The elephants were guided across the Yuanjiang river in Yunnan on Sunday night and authorities are working to open a path for them to return to the nature reserve where they lived in the Xishuangbanna Dai Autonomous Prefecture, the Associated Press reported on Tuesday.

As of Sunday night, the herd was still 200 km away from the reserve, but authorities say the animals are in a “suitable habitat” after crossing the river.

The elephants left the nature reserve more than a year ago and wandered over 500 km. It is not clear why they left the reserve, although experts say that shrinking habitats could have played a hand in their surprise migration.

“Large-scale human engineering developments have exacerbated the ‘islanding’ of elephant habitats,” Zhang Li, a professor on mammal conservation at Beijing Normal University, was quoted as saying by The Guardian. “The traditional buffer zones between humans and elephants are gradually disappearing, and the chances of elephants’ encountering humans naturally increase greatly,” he said.

Some experts also believe the leader of the group might have led it astray, since it is rare for elephants to trek so far.

Local authorities had earlier deployed drones and trucks to monitor the herd’s progress. Chinese state television also launched a 24-hour live feed of the herd – and photos of the animals went massively viral on social media, both in the country and abroad.

However, the elephant herd was not welcome everywhere it went, with locals complaining of the damage it left in its wake. Since mid-April, the elephants have wrecked around 56 hectares of crops, causing an estimated 6.8 million yuan ($1.07 million) in losses, according to a report from last month.