As of now the world is about 1.1 degrees warmer than it was roughly about 120-170 years ago

The picture is clear. There is no place to hide from climate change. The world’s latest, definitive report out today on the crisis says this is affecting every inhabited region across the globe. The United Nation’s climate change science body, the IPCC or Intergovernmental Panel on Climate Change has released its Sixth Assessment Report. 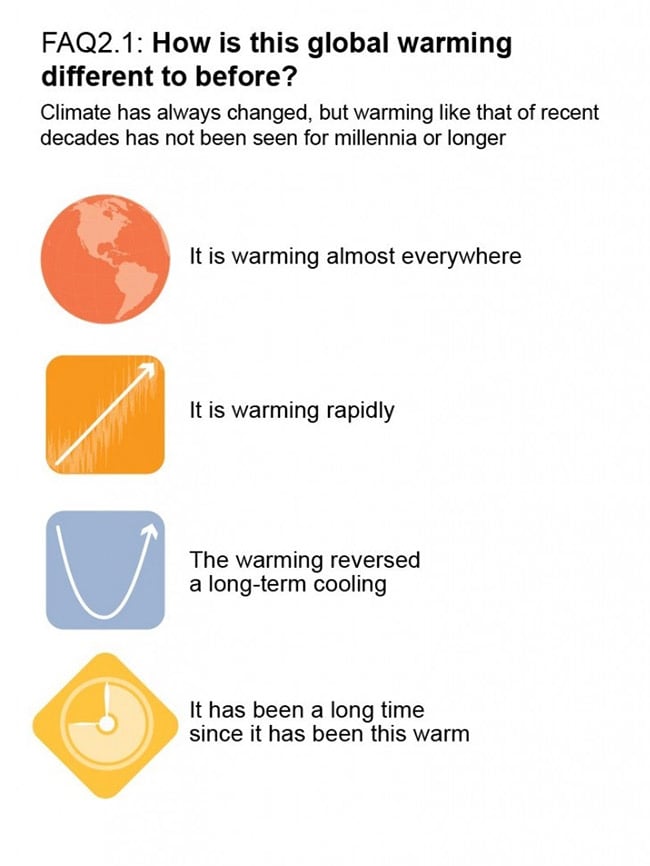 “This report is a reality check,” says one of the co-chairs of a working group, Valerie Masson-Delmotte. Climate change can be limited but that would require “strong and sustained” reductions in emissions of carbon dioxide and other greenhouse gases. But even in the best-case scenario it would take 20-30 years for temperatures to stabilise.

Global warming is calculated over the average the years between 1850-1900, which the most recent period when there was no human effect on climate. The current rates of increase in greenhouse gases, mainly carbon dioxide, methane and nitrous oxide, are unprecedented in at least 800,000 years. The reason for such rapid climate change is human activity. This is producing massive amounts of heat-absorbing greenhouse gases or GHGs released by burning fossil fuels like coal and petroleum products, deforestation and agriculture. GHGs trap heat, warming the climate.

The report has analysed five socioeconomic pathways or scenarios of emission cuts. But only the most ambitious of these would see temperatures rise to above 1.5 degrees Celsius but below 2 degrees Celsius. Of the five scenarios, the middle one (called SSP2-4.5, Shared Socio-economic Pathway or ‘SSP’ describing the socio-economic trends underlying the scenario) most closely mirrors the emissions trajectory we’re currently on because of the total nationally determined contributions or NDCs which are climate pledges. But the current path is likely cause warming by 2.1 degrees Celsius to 3.5 degrees Celsius which is well above the acceptable limit of 1.5 degrees Celsius. The IPCC says decision makers need to implement net zero, that is take out as much carbon dioxide as is being emitted, plans if we are to slow down warming the planet. Several big countries have announced net-zero targets by around 2050-2060, although India has pushed back on the grounds that these don’t consider the rights of developing countries to economic growth. Instead, New Delhi wants G20 countries to reduce per capita emissions; India is the third largest polluter but has one of the lowest per-capita emissions specially among large economies. 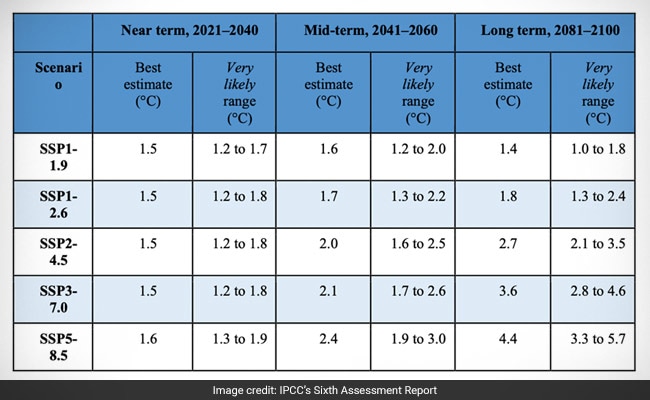 To limit global warming to the Paris ideal of 1.5 degrees Celsius, the report estimates that we can emit only about 400 billion tonnes of CO2 – a carbon budget – more into the atmosphere; current annual emissions are 40 billion tonnes annually. The math is simple enough – time is running out fast. From 1750 to 2019 the cumulative CO2 emissions were over 2,500 GtCO2. 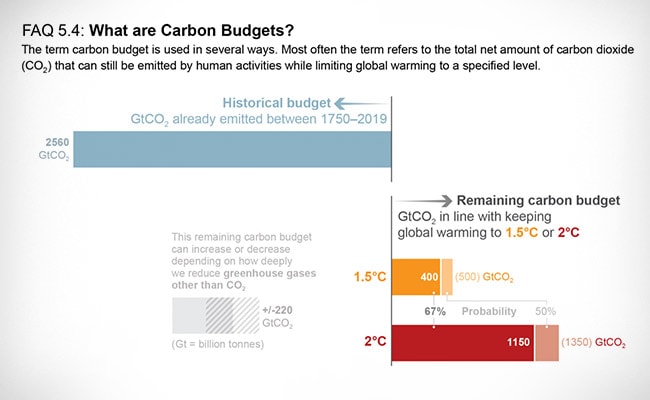 What’s the worst that could happen above 1.5 degrees Celsius warming?

As of now the world is about 1.1 degrees warmer than it was roughly about 120-170 years ago. This may not seem much, but it’s already bad enough to make extreme weather events almost daily headlines. Images from recent such events are haunting – almost 50 degrees in Canada, floods in Germany and China, India’s recent cyclones Nisarga and Amphan unusual for the timing and intensity, many times above-normal rainfall in parts of Maharashtra, wildfires in California, extraordinarily high temperatures in the Arctic.

At a briefing, one of the authors, Dr Friederike Otto of the Environment Change Institute, University of Oxford, said for India the fallout is likely to be more heatwaves, more intense rainfall, melting of glaciers, and compound events like the flooding of coastal areas during tropical cyclones. Even if emissions are cut and warming stopped at 1.5 degrees Celsius, effects would continue, for instance, Himalayan glaciers would continue to melt. 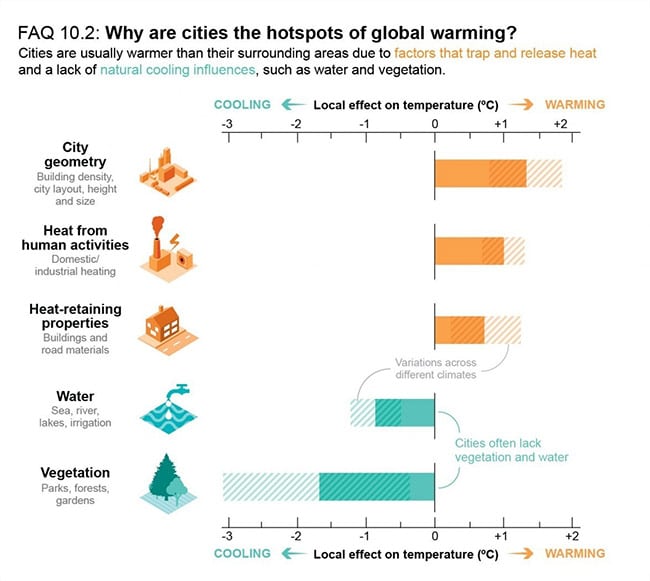 The chances of one-in-10 year or one-in-50 year extreme weather events have increased already with the 1.1 degrees rise in temperature. Extreme hot temperatures now likely occurs almost three times more than the 1850-1900 years; at 1.5 degrees this will be over four times more. On our current trajectory this could be six times more frequent and intense.

Intense 1-day precipitation that occurred once every 10 years back then, will now be 1.3 times more likely. If that doesn’t seem like much, consider this: recently, on the 23rd of July, the Indian Met Department reported 24-hour rainfall many times above normal in these places: 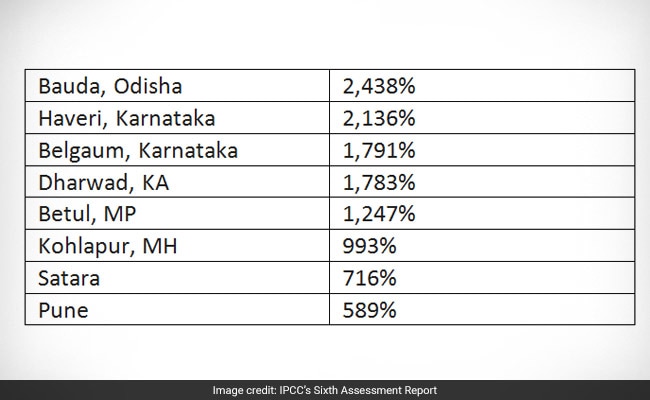 Two weeks later, on the day the IPCC report was finalised, Guna in Madhya Pradesh in central India, had 984 per cent above normal rain, Eranakulam in the south was 359 per cent, and Bageshwar in the Himalayan state of Uttarakhand was 413 per cent.

Climate change can’t be reversed for many decades, there’s far too much carbon dioxide in the air. In the pre-industrial times it was about 280 parts per million, now almost 420 parts per million, the last time it was this high was over 4 million years ago. But its rise can be limited, as the report says with strong and sustained and immediate measures to cut emissions. Question is, will governments act on this? They’re being asked to do a lot more but so far their track-record has fallen short.

Rich nations have consistently under-delivered on the $100 billion-a year in climate finance for the last decade, finance meant to help mitigation and adaptation in emerging and developing economies. On the other hand emerging economies, particularly China, India, Turkey and Indonesia are building new thermal power plants which will pump out more CO2 despite the IPCC’s dire warnings. While countries like India have a strong argument that they are low, per-capita emitters and need the cheap coal-based energy to pull millions out of poverty, the Overseas Development Institute, a UK-based think-tank says calls India’s investment in coal a “missed opportunity” not just for a global leadership role, but also because a warming climate will have more devastating impact; investing in mitigation and adaptation technologies and services only has upsides like growth, jobs, cleaner air.

The IPCC’s report lays out the latest science for the next round of the climate conference, COP26, to be held in Glasgow, UK, later this year. That’s when governments will meet to discuss how to cut emissions. UK Prime Minister Boris Johnson has said, “I hope today’s IPCC report will be a wake-up call for the world to take action now, before we meet in Glasgow in November for the critical COP26 summit.”

In a meeting with scientists later today, COP26 President Alok Sharma will encourage countries that have not already done so to urgently submit new or updated NDCs with their plans for ambitious climate action ahead of COP26, particularly all major economies of the G20 who are responsible for over 80 per cent of global emissions.

So far almost all self-determined commitments of nations or NDCs fall short of the Paris conference’s target to keep warming under 2 degrees Celsius. Now they are being called upon to make immediate, rapid and large-scale reductions in emissions. Climate conferences are always contentious with plenty of finger-pointing. With the fate of over 7 billion people in their hands, not to mention future generations, will these 195 IPCC member countries rise to the occasion?