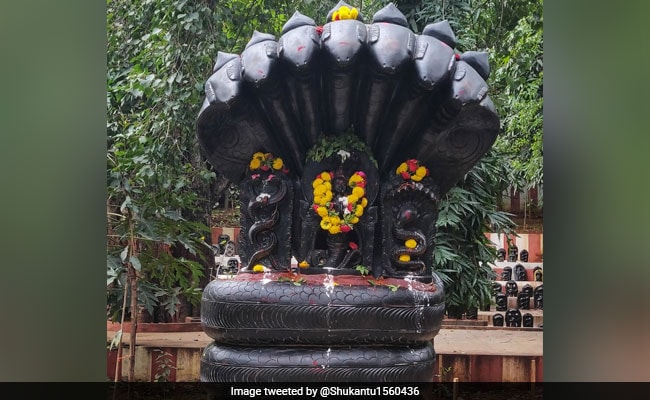 Nag Panchami is a day devoted to the Nag Devta or the snake god in the Hindu tradition. Every year, this day is celebrated during the auspicious month of Sawan, according to the Hindu calendar. This year, Nag Panchami is on August 13. It’s an important day for the devotees of Lord Shiva and Lord Vishnu. These gods, in Hindu mythology, are associated with snake — Lord Shiva is seen with a snake coiled around his neck while Lord Vishnu is known to use the snake or Sheshnag as his vehicle.

Nag Panchami in 2021: Dates and timings

Offering milk to the snake god is the main ritual on Nag Panchami. It is a belief among the people that offerings to the Nag Devta on this day save their families from any evil. Many observe fasts and feed the poor to mark this day. Some devotees also make snake idols at home with clay. Flowers and milk are offered to the idols and placed near snake holes or burrows.

Houses are decorated with rangoli on Nag Panchami.

On Nag Panchami, devotees take bath in the morning and then create an image of Nag Devta using with clay or cow dung on the door of the house. Then durva, kusha and flowers are offered to the Nag Devta. The main cuisine for Nag Panchami is everything milk-based, from kheer to sweets, which is then offered to the deity. Some of the snake gods that people in India pray to on Nag Panchami are Ananta, Shesha, Vasuki, Kambala, Padma, and Kaliya.

The snake god finds mention in several Hindu scriptures. Lord Shiva’s snake Vasuki is mentioned in many scriptures where it played a vital role during the Samudra Manthan or the episode of churning nectar from the ocean.

In another tale, a deadly snake was found poisoning the waters of the Yamuna river. This troubled the Brijwasis (people living in Brij, now in Uttar Pradesh). To alleviate their suffering, Krishna (an avatar of Lord Vishnu) defeated the snake and forced it to take back its poison from the river. Thereafter, Krishna blessed it that whoever should pray and offer milk to the snake god, they would be protected from the evil.