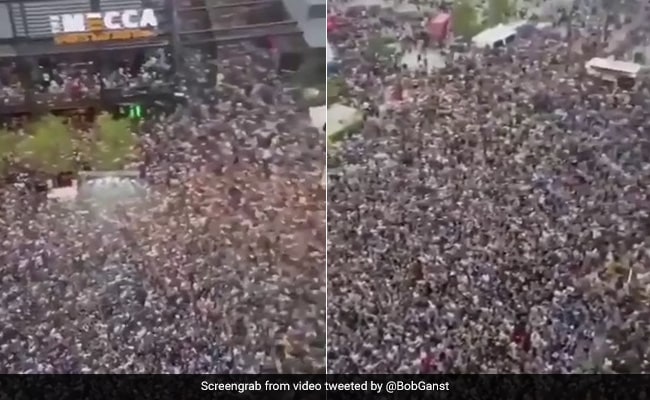 A viral video claims to show around 3 lakh fans waiting for Lionel Messi in Paris.

One of the biggest news from the world of sports in the last few days has been the end of footballer Lionel Messi’s long association with FC Barcelona. This was followed by the football icon officially signing a contract with Paris Saint-Germain (PSG). This development was welcomed and celebrated by fans of the game as well as Messi, in France. Soon after, a video began doing the rounds on social media, claiming that a crowd of over 300,000 people had thronged the streets of Paris to welcome Messi to the city. The video went viral, recording over 2.8 lakh views since it was published on Twitter on August 10.

The video of the crowd was shared on Twitter with the caption, “Over 300,000 people are in Paris street rn, this is why Messi is the best player of all time.”

However, it turns out that despite Messi’s enormous fan base across the world the video in question is fake. While many fans fell prey to the video given the sheer euphoria around the development in the French footballing world, some users were quick to spot signage in the area that suggested that the clip was, in fact, not shot in Paris at all.

This was further confirmed by the presence of signage that read “Mecca” at the beginning of the video. This was a part of the sign for The Mecca Sports Bar and Grill in Milwaukee, Wisconsin, a report by Newsweek confirmed. This was reiterated by a location check through Google Maps, which confirmed that the signs were from the said area.

Some Twitter users also pointed out that the video actually features fans of the NBA team, the Milwaukee Bucks. In July, crowds were reported to have been celebrating on streets in the Deer District “for Game 6 of the NBA finals.”  A report by Chicago Tribune with images also confirms that fans had gathered outside Fiserv Forum on July 20 for the finals.

Stop posting fake nonsense, this is from the Milwaukee Bucks Championship run in the NBA.

Moreover, a video shared by the official Twitter page of NBA looks identical to the one shared as a clip of Messi fans. The locations, too, are identical. Take a look.

The Deer District right before tip!

The heavy numbers in Wisconsin were attributed to the fact that this would be Milwaukee Bucks’ first win since 1971, which they achieved by defeating the Phoenix Suns.

Therefore, it is clear that the viral video does not show fans thronging to the streets of Paris to welcome Messi.