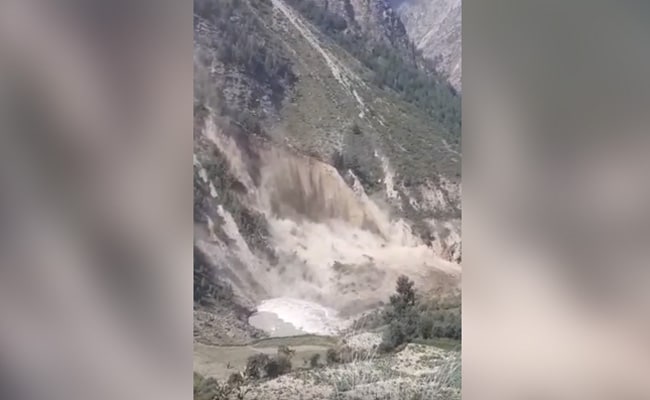 A landslide in Himachal Pradesh’s Lahual-Spiti district on Friday has blocked the flow of the Chandrabhaga river, leading to the formation of a lake that poses a threat to agricultural fields and the nearly 2,000 people living in villages in the area.

No fatalities or injuries have been reported so far.

District Deputy Commissioner Neeraj Kumar said a portion of a nearby hill caved in at around 9.30 am yesterday, completely blocking the river. A team of experts has been rushed in to take stock of the situation and suggest countermeasures, he said.

A brief video of the landslide shows quite a large section of a steep hill caving in and dumping a massive load of soil, rocks and other debris on the Chandrabhaga as it winds its way past.

The video shows plumes of dust rising and settling as the landslide covers a section of the river, leaving a big gaping hole in the side of the hill.

A landslide blocked the flow of the Chandrabhaga River this morning and led to the formation of a lake that poses a threat to the human habitations and agricultural fields in Lahaul-Spiti district. @ndtvhttps://t.co/6iSoL9RWiJ

Multiple landslides have hit Himachal Pradesh over the past few weeks, leading to several deaths.

Fourteen people have died after a landslide in Kinnaur on Wednesday left many vehicles, including a state-run bus, buried under debris. The bus, travelling to Shimla, reportedly had 40 people on board.

Chief Minister Jai Ram Thakur said the state would give Rs 4 lakh each to the families of those who died and Rs 50,000 to those seriously injured; all injured will also receive free treatment, he said.

Around the same time a terrifying video emerged from the Simraur area , which showed a large section of a paved road collapsing in a landslide; 100 metres of the road vanishes in moments.

And in yet another tragic incident last month, nine tourists were killed in Kinnaur after a rockslide thundered into a car. A video that surfaced on social media, showing an entire section of a bridge crumpling like paper under the impact of the boulders and disappearing in plumes of dust.

Among those who died was a young doctor whose last Twitter post was minutes before the accident.

With input from PTI