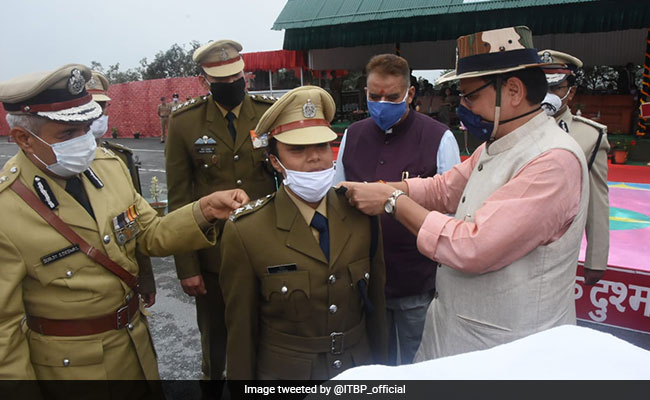 For the first time, two women officers joined Indo Tibetan Border Police (ITBP) as Assistant Commandants on Sunday after they passed out from ITBP Academy in Mussoorie. The rank ceremony was held at the Academy in presence of Uttarakhand Chief Minister Pushkar Singh Dhami.

The ITBP started the appointment of woman combat officers as company commanders through UPSC/CAPF exams in 2016. The two officers are Prakriti and Diksha (both officers go by their first name).

Prakriti is an electrical engineer and Diksha is the daughter of serving Inspector Kamlesh Kumar in the ITBP.

During the passing-out parade, CM Dhami told the officers, “You are lucky that you have got the opportunity to serve ITBP, which is deployed on the borders of Tibet and China.

During the event, the Indo-Tibetan Border Police (ITBP) force released the first-ever book on its history titled ”History of ITBP”. The book has been published in view of making a reference volume for factual history and knowledge of the force to officers and its troops. The paramilitary force said the book will also be useful for administrative and training purposes for in-depth details as the official history of the force, informed the ITBP.

There was no such book on the ITBP available till this publication, said ITBP Spokesperson, Vivek Kumar Pandey, adding “it contains historical achievements of the force since its inception”. The book is in English and reflects different facts and facets about historical developments in the force over the years.