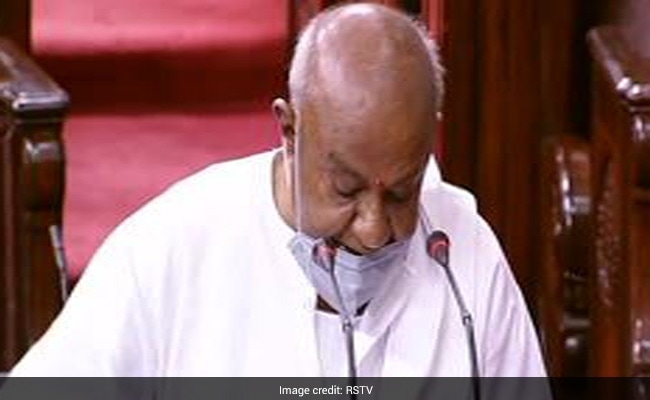 The ending of the monsoon session of parliament – with much left undone – has saddened former Prime Minister HD Deve Gowda.

The Janata Dal Secular leader released a statement, expressing his disappointment at not being able to speak as planned on various issues.

The statement says: “The monsoon session of parliament has come to an end. I had made notes to speak on four topics – farm laws, price rise, the 127th Constitutional Amendment Bill on the OBC list, and Pegasus. I could not speak on any topic (not that I would have been given an opportunity to speak on all subjects because my party is in the minority of one) because the parliament was continuously disrupted.”

Mr Gowda made his emotions clear on the issue. “I feel very sad. I am nearing 90 and despite the usual age-related troubles, I attended parliament religiously, as I have done ever since I entered it the first time, decades ago. It was our collective duty as members of both the houses to assure the people of India that ours is a functioning parliamentary democracy. When the idea of democracy itself the world over has come under a severe strain, it was our duty to convince the younger generation that this is the best form of government. I do not wish to blame anybody but would like to say that both those in the government and Opposition have to reflect and reflect hard about how we should move forward.”

The political veteran spoke of the news for a middle path to allow discussion to actually happen in parliament.

“Being terribly adamant and being over-enthusiastic are both dangerous. We have to quickly find a middle-path. Parliament has to once again become a place where we speak to each other, discuss and dissent in a dignified manner,” he said.

As the opposition protested on a range of issues including the Pegasus snooping scandal, fuel prices and the Covid crisis, the government was accused of rushing through bills without discussion.

This morning, Congress MP Rahul Gandhi and nearly a dozen other opposition leaders protested outside parliament against the “abrupt end to monsoon session”.