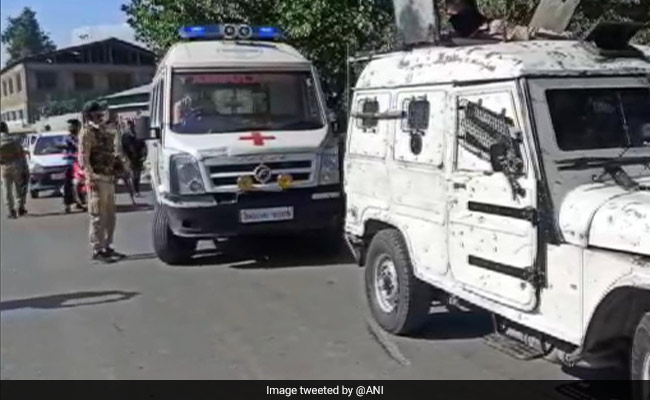 Deferred visuals of the scene of the terror attack

Ghulam Rasool Dar, a BJP leader from Jammu and Kashmir’s Kulgam district, and his wife were shot dead in a terror attack in south Kashmir’s Anantnag town on Monday.

Mr Dar, who was the district head of the BJP’s Kisan Morcha, and his wife were in the Lal Chowk neighbourhood of the town when terrorists opened fire, J&K BJP leader Altaf Thakur was quoted by news agency ANI. The two were rushed to a hospital for treatment, but died of their injuries.

The BJP has condemned the killing, calling it “barbaric”.

Deferred visuals from ANI show police and security forces standing by the side of a small road and keeping bystanders at bay. Visuals also show an ambulance pulling away from the scene.

Mr Dar, a resident of Kulgam’s Redwani, was a sarpanch, or village chief, affiliated with the BJP. He unsuccessfully contested last year’s District Development Council elections.

At the time of his death Mr Dar was living in rented accommodation in Anantnag.

Authorities recovered a large cache of arms and ammunition – including two AK-47 rifles, a Chinese-made pistol and four grenades – from a terrorist hideout in Poonch district.

This was after a joint search operation in forests in the Mendhar sector – involving the Border Security Force, the Rashtriya Rifles and the Special Operations Group of the local police force – SPS Sandhu, the BSF’s Deputy Inspector-General, told news agency PTI.

With input from ANI, PTI