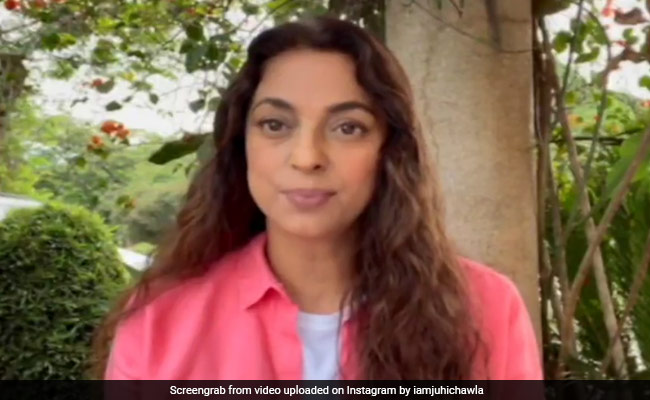 Juhi Chawla today hit back at digs on dismissal of her recent plea against 5G.

Actor Juhi Chawla today hit back at digs that her recent petition challenging the rollout of 5G in the country — dismissed by the Delhi High Court – was “a publicity stunt” in a video on Instagram.

Posting a 14-minute video detailing her objections to 5G technology and its health impact, Juhi Chawla wrote: “I’ll let you decide if it was a publicity stunt.”

The actor said she approached the Delhi High Court to secure a guarantee to the public at large that 5G is safe for humans — “men, women, adults, small children, animals and every type of living organism”. An 11-year journey brought her to this point, she said, explaining that it all started when 14 mobile towers were installed near her home in Mumbai.

The actor had a private agency test radiation around her house and was told that it was at alarming and harmful levels.

In June, the Delhi High Court dismissed her petition, imposed a Rs 20 lakh fine and said in stern remarks that the lawsuit appeared to be “for publicity”.

The court hearing made headlines as Juhi Chawla shared a link of the court hearing on social media, prompting rogue fans to log on and interrupt the virtual hearing with songs from her films.

“It appears the suit was for publicity. Juhi Chawla circulated a link of the hearing on social media,” the High Court said.

In her video, the actor said the Delhi High Court lawsuit followed her RTI application to the government for information on whether any study had been done on the effect of radiation from mobile tower antennae on living beings for cellular technologies ranging from 2G to 5G.

According to her, the ICMR (Indian Council of Medical Research) replied that it was conducting a study on the effect of radiofrequency emitted by phone towers of 2G and 3G.

The Science and Engineering Research Board reportedly responded to say no studies had been conducted specifically on 2G, 3G, 4G and 5G.

Juhi Chawla said she had also made a presentation before a parliamentary committee in 2013 and in 2015 petitioned the Bombay High Court for regulation on mobile tower installation.

That case did not move for over a year, she claimed, until a judge said it could be clubbed with other petitions pending in the Supreme Court.

“If 2G to 3G to 4G are a step each, then from 4G to 5G is a giant leap. You can ask anybody in the telecom industry – 5G will cross all limits of radiation. All companies will drown us in radiation in the race for faster, better network service. So if, for the safety of children, pregnant women, future generations, animals, plants, we raised some questions, do you think we were wrong?” — the actor questioned.