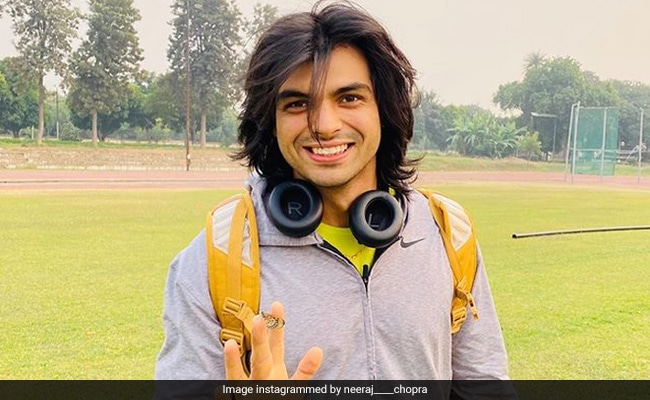 Neeraj Chopra, who won the first Olympic gold medal in athletics for India, is now a sporting sensation in the country. But how did he reach here? How did he take up javelin when others were following more popular sports? An old video of the Olympic gold medalist from Panipat, Haryana, is now being widely shared online. In the video, which was shared on Twitter by the BJP’s Tajinder Pal Singh Bagga, Mr Chopra talks about how he started his journey. At the time, Mr Chopra, now 23, had long hair that used to cover most of his forehead. So, he was also asked about the inspiration behind those locks.

The video appears to be from a Star Sports event celebrating sportspersons and it has got 11.6k likes on Twitter. It has been viewed 72.7k times as well.

When asked whether his long locks were inspired by actor Shah Rukh Khan or cricketer Ishant Sharma, Mr Chopra said with an understated conviction, “Neither.”

When the host asked him, “How did javelin happen, tells us the story?”, Mr Chopra requested him to ask the question in Hindi and then went on to narrate his story. “God decided it for me. I used to play different sports in my village (Khandra). But once I went to the ground and saw seniors throwing the javelin in the air, I joined them.”

“I did not even know what javelin is. It started just like that and now I’m here in front of you,” he added.

Several people commented on the post to congratulate Mr Chopra.

A user said he respected the athlete and was feeling proud after his performance.

Another said Mr Chopra was the “original gem” of the country.

A third user praised Mr Chopra for saying that he was his own inspiration.

Some urged him to remain sober and maintain his simplicity.

Hope he maintains his simplicity, soberness and down to earth attitude .. ❤️

On Monday, he was asked again about those long locks at an event to felicitate him after his return from Tokyo Olympics. Stating that the long hair was creating problems for him, Mr Chopra said, “style baad mei ho jaayega, game pehle(style can come later, my game comes first)”.

He added, “In a couple of competitions, it was causing me to sweat, and it was dripping onto my eyes. I tried using a hair band also, but it would fall off.”