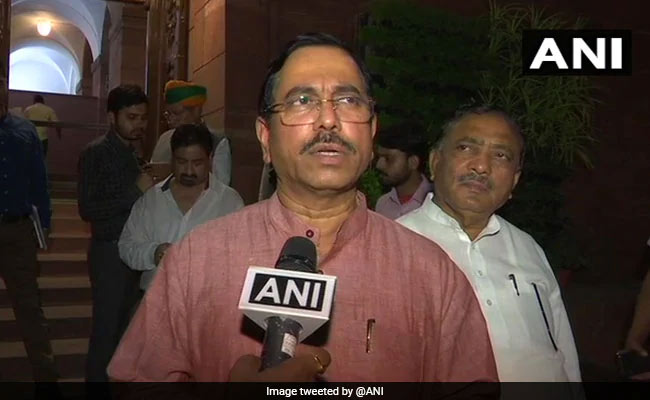 Mr Joshi termed “totally false” the opposition’s allegations that marshals manhandled their MPs and said one can check facts from CCTV footage.

“The opposition is spreading lies. Marshals can’t dare to touch MPs, they can’t even think about it. CCTV footage will establish that they are lying,” he told reporters outside the Parliament building.

Mr Joshi said the government demands that the Rajya Sabha chairman constitute a special committee to probe the misbehaviour and indiscipline by opposition members, and strict action should be taken against them.

He said he has never seen such behaviour by MPs in his parliamentary career.

Leader of the House and Commerce Minister Piyush Goyal alleged that an MP tried to “strangulate” a lady security officer.

The Rajya Sabha chamber witnessed ugly scenes of opposition members jostling with marshals as they tore papers, entered the Well of the house and attempted to go near the presiding officer’s chair.

After a peaceful debate and the smooth passage of a bill to restore the states’ powers to identify and notify their own lists of OBCs, all hell broke loose when the insurance amendment bill to privatise the state-run general insurance companies was taken up.

Calling it a sell-off, the opposition MPs entered into the Well of the House shouting anti-government slogans.

They were, however, prevented from going anywhere near the table of the House or the chair by a wall of about 50 security staff that sort of cordoned off what Chairman M Venkaiah Naidu referred to as the “sanctum sanctorum”.

But this did not deter the MPs belonging to a cross-section of opposition parties — from the Congress to the Left to the Trinamool and to the DMK.

They tore papers, believed to be copies of the bill, and lofted those towards the chair and the House officers. Some tried to break the cordon and jostled with the security staff.

During the tussle, the House passed the insurance bill by a voice vote, with Finance Minister Nirmala Sitharaman not even replying to the limited debate that could take place.

The ruckus forced two adjournments and later, when two separate bills on homeopathy and the Indian system of medicine were taken up, the opposition MPs staged a walkout.

During the ruckus, the MPs carried placards and shouted slogans. Dola Sen of the Trinamool Congress (TMC) held a string tied around the neck of a fellow MP, who had a placard hung around her neck saying “Democracy Killed”.

Ripun Bora of the Congress made unsuccessful attempts to climb over the marshals to reach the chair.

Some of the MPs whistled and a few others stood up on their seats.