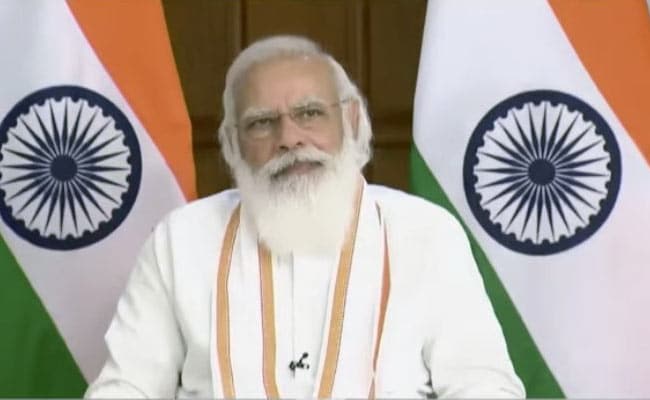 Appreciating women’s role during the ongoing COVID-19 pandemic, Prime Minister Narendra Modi on Thursday said that the way the women Self Help Groups (SHGs) across the country have served the nation during the pandemic by producing masks and sanitisers and creating awareness about the infection is unprecedented.

The Prime Minister, speaking at the “Atmanirbhar Narishakti se Samvad” event, informed that there are over 42 crore Jan Dhan bank accounts out of which 55 per cent are held by women.

At the event, PM Modi congratulated the women SHGs and said, “I congratulate our sisters, who along with giving a better life to their families, have helped in the development of the country too.”

The Prime Minister released the capitalisation support funds to the tune of Rs 1,625 crore to over 4 lakh SHGs. In addition, he will release Rs 25 crore as seed money for 7,500 SHG members under the PM Formalisation of Micro Food Processing Enterprises (PMFME) scheme of the Ministry of Food Processing Industries and Rs 4.13 crore as funds to 75 Farmer Producer Organizations (FPOs) being promoted under the Mission.

“Our government provided more support to women’s SHGs as compared to previous governments. We opened bank accounts for women and provided loans without guarantee to SHGs. In seven years, SHGs have done commendable work in paying back their loans. There was a time when 9 per cent of loans became bad loans. This has now reduced to 2-2.5 per cent. The country acknowledges your honesty,” PM Modi said.

“In a bid to further motivate Self Help Groups, they will now get loans worth Rs 20 lakh – double the amount it was. The regulatory framework has also been reduced,” he said.

While interacting with the members of the women SHGs, the Prime Minister also mentioned that the government is promoting “Made in India” toys and motivated the SHGs to sell their products through the Government e-Marketplace (GeM) portal.

“With the right packaging, you can send your product to cities by forming ties with online companies. The government has also started the GeM portal. You can sell your products to the government as well via this portal.”

“Women SHGs, to mark the 75th year of Independence, can take out 75 hours in the entire year and do swachhta (cleanliness)works and water conservation works, which will help the society at large,” he added.

According to the Prime Minister’s Office, DAY-NRLM aims at mobilising rural poor households into SHGs in a phased manner and provide them long-term support to diversify their livelihoods, improve their incomes and quality of life. Most of the Mission’s interventions are being implemented and scaled up by the SHG women themselves who are trained as community resource persons (CRPs) – Krishi Sakhis, Pashu Sakhis, Bank Sakhis, Bima Sakhis and Banking Correspondent Sakhis.