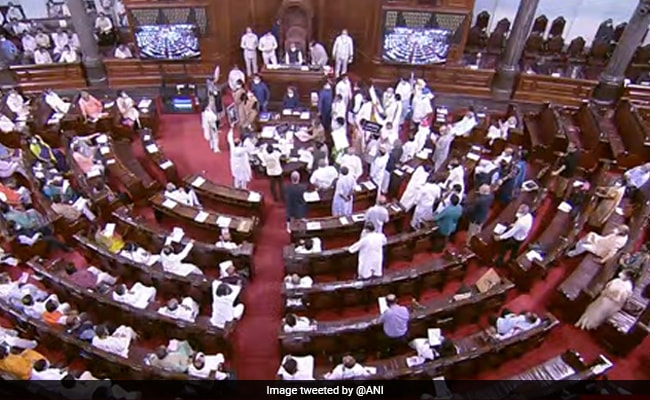 Monsoon session: Rajya Sabha has lost a total of 76 hours and 26 minutes due to disruptions

The Rajya Sabha has lost a total of 76 hours and 26 minutes due to disruptions during the monsoon session. The productivity has been decided as 28 per cent, the Rajya Sabha Secretariat said today after the session ended. The average productivity of the last five sessions was 95 per cent. The Rajya Sabha passed 19 bills this time.

The total sitting time available was 102 hours, out of which only 28 hours and 21 minutes were counted as “functional time”, the Rajya Sabha Secretariat said in the statement.

The department related to the Standing Committees of Rajya Sabha met 17 times, and the average attendance in each of these meetings was 54.45 per cent – the highest ever, the Rajya Sabha Secretariat said.

At least 406 Zero Hour and Special Mentions were lost due to disruptions.

Earlier in the day, amid continued uproar by opposition members, Rajya Sabha proceedings were adjourned for 30 minutes, till 7.04 pm, soon after the house passed a bill for privatisation of state-owned general insurance companies. It was the third adjournment of the day. Before this, the proceedings were adjourned in the morning session till 12 pm and again for 15 minutes till 6.26 pm.

When the house reassembled at 6.26 pm, several slogan-shouting opposition members again trooped into the well of the house.

The General Insurance Business (Nationalisation) Amendment Bill, 2021 moved by Finance Minister Nirmala Sitharaman was passed by a voice vote amid the uproar. However, the opposition members kept raising slogans and papers were flung in the air.

Union Minister and Leader of the House Piyush Goyal, while thanking the members who participated in the debate and helped in the passage of bills, demanded strict action against the opposition MPs who disrupted the upper house. “I feel strict action should be taken against the condemnable acts of some erring members… The dignity of this august house has been lowered as security staff was attacked. Such behaviour will not be tolerated and we condemn it,” Mr Goyal said.

On Tuesday, some Trinamool Congress, Congress, Aam Aadmi Party and Left MPs climbed on the house table placed right below the presiding officers’ chair and shouted slogans, forcing multiple adjournments. A Congress MP also threw a file towards the Chair.