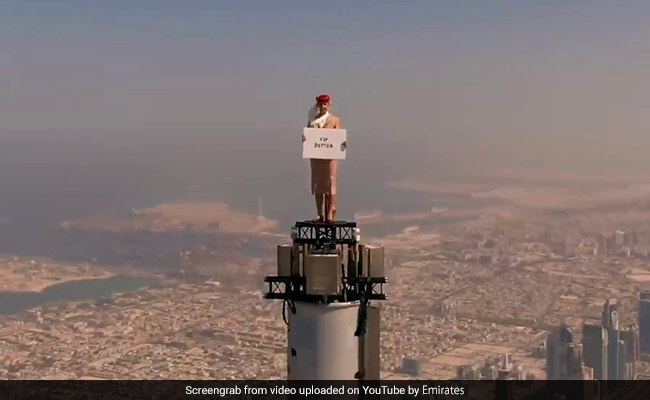 Emirates Airline’s latest ad was filmed on top of the Burj Khalifa.

UAE-based airlines Emirates recently released an ad filmed on top of the world’s tallest building, and it instantly created a huge buzz on social media. The 30-second ad features Nicole Smith-Ludvik, a professional skydiving instructor, as an Emirates cabin crew member who stands atop the Burj Khalifa. In her hand, she holds a series of placards that read: “Moving the UAE to the UK Amber list has made us feel on top of the world. Fly Emirates. Fly better.” While viewers initially do not get to see where Ms Smith-Ludvik is standing, the camera soon zooms out to reveal that she is actually on top of the Burj Khalifa.

The ad provides a heart-stopping view of Dubai stretching out hundreds of feet below Ms Smith-Ludvik, who stands on a narrow ledge with the wind howling around her.

The Burj Khalifa in Dubai is the world’s tallest building, standing 2,722 feet tall. While the video created a buzz on social media with its innovative concept, a section of the Internet also raised doubts about its authenticity. Some on Twitter accused Emirates of using green screens to film the video instead of actually climbing to the top of the Burj Khalifa.

Emirates took to Twitter yesterday to respond to the allegations. The airline shared a video which shows the ad was actually filmed on top of the world’s tallest skyscraper.

Filming at the pinnacle took rigorous planning and a strict safety protocol, said Emirates. “From level 160, we climbed for over an hour to reach the top,” the airline explained in its video.

Real or fake? A lot of you have asked this question and we’re here to answer it.
Here’s how we made it to the top of the world’s tallest building, the @BurjKhalifa. https://t.co/AGLzMkjDON@EmaarDubai#FlyEmiratesFlyBetterpic.twitter.com/h5TefNQGQe

In a statement, Emirates further explained that a casting call was “put out to Emirates’ very own cabin crew team and while there were some willing and capable candidates, a professional skydiving instructor was cast to ensure the highest levels of safety.”

For filming at the top, a custom platform with a pole was constructed for the actress to stand on.  “She was attached to the pole as well as two other different points directly to the pinnacle, through a hidden harness under the Emirates uniform,” said Emirates.

Shooting for the ad began at sunrise and took about five hours to complete – excluding the one hour and 15 minutes it took for the team to climb to the top.