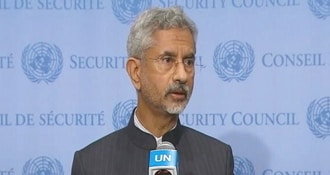 The financial resource mobilisation of ISIS has become more robust, External Affairs Minister S Jaishankar told the United Nations Thursday, emphasising that the flow of funds has continued for the dreaded terror group and rewards for killings are now being paid in Bitcoins.

“ISIL (Daesh) remains active in Syria and Iraq and its affiliates are growing in strength, particularly in Africa. The financial resource mobilisation of ISIL (Daesh) has become more robust. The flow of funds has continued and rewards for killings are now even being paid in Bitcoins!” he said.

He said the ISIS’ modus operandi has changed, with the core focusing on regaining ground in Syria and Iraq and affiliates functioning independently.

“This evolving phenomenon is extremely dangerous and poses a new set of challenges to our collective efforts in our fight against ISIL and terrorism,” S Jaishankar said.

“Let us always remember that what is true of Covid is even more true of terrorism: none of us are safe until all of us are safe,” he cautioned.

S Jaishankar outlined an eight-point action plan for consideration to collectively eliminate the scourge of terrorism which includes summoning of the political will and refraining from justifying or glorifying terrorism.

“No double standards. Terrorists are terrorists; distinctions are made only at our own peril,” he said.

“Don’t place blocks and holds on listing requests without any reason, discourage exclusivist thinking and be on guard against new terminologies and false priorities,” he said.

He also underlined the need to “enlist and delist objectively, not on political or religious considerations.”

Recognise the linkage to organised crime. Support and strengthen the FATF, and provide greater funding to UN Office of Counter Terrorism,” he added.

S Jaishankar called on the UN Security Council to collectively build on these principles.

“It is also important to end the stalemate preventing the adoption of a Comprehensive Convention on International Terrorism, which India has championed for so long,” he said.

The External Affairs Minister said India has been at the forefront of global counter-terrorism efforts, has taken part in all major global initiatives against international terrorism and is a party to all United Nations’ sectoral conventions relating to terrorism.

“We were pleased to play our role in strengthening the Global Counter-Terrorism Strategy adopted last month. We reiterate our full support for counter-terrorism cooperation under the auspices of the UN,” he said.

Three Exercises That Men Should Add To Their Exercise Regime For A Toned Physique...

OnlineWiki - January 11, 2022
OnlineWiki is your news, entertainment, music fashion website. We provide you with the latest breaking news and videos straight from the entertainment industry.
Contact us: onlinewikis@gmail.com