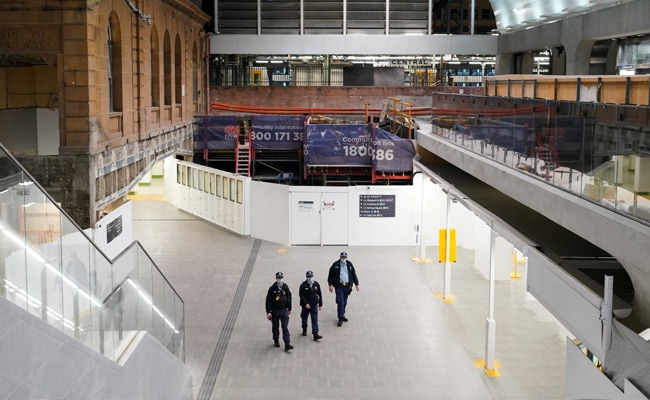 Police officers patrol through the quiet Central Station in the city centre during a lockdown.

More defence personnel could begin patrolling Sydney from next week to help ensure compliance of lockdown rules as officials on Friday warned of a surge in cases in Australia’s largest city after it reported its biggest daily rise in infections yet.

“Unfortunately, this trend (in cases) will continue for at least the next few days,” New South Wales (NSW) state premier Gladys Berejiklian told reporters in Sydney, the state capital.

As daily COVID-19 cases hover near record highs in the city, the defence department said they have received a request for extra personnel to help support state police to enforce home-quarantine orders in the worst-affected suburbs.

More than 500 unarmed army personnel are already helping police in Sydney, including monitoring compliance activities at hotels and airports.

Despite a nearly seven-week lockdown in Sydney, NSW state reported 390 new locally acquired cases, most of the cases in the city, eclipsing the previous daily high of 356 set on Tuesday. Daily cases have topped 300 for the past four days.

Two new deaths have been recorded, taking the total number of deaths in the latest outbreak in the state to 38.

Several regional towns in NSW are also in lockdown due to people breaching the Sydney lockdown and spreading the virus. One of the most concerning is in the town of Walgett in far northwest NSW where 80% of the population is indigenous.

Berejiklian said the surge in the highly infectious Delta variant has never been “tested in this magnitude in Australia”, but stopped short of announcing tougher restrictions and implored Sydney’s five million residents to strictly follow the existing curbs to contain the outbreak.

“I am a bit tired of hearing people say they don’t know what they are supposed to do,” Berejiklian said.

The surge in cases comes as Australia’s national cabinet is due to meet later on Friday amid worries the Delta outbreaks in NSW could seep through the country, where only about 25% of people above 16 are fully vaccinated.

Some states have closed their borders with NSW or enforced restricted entry to stop the spread.

Australian Prime Minister Scott Morrison, under fire for a sluggish vaccination rollout, has been calling fellow world leaders in a bid to procure immediate vaccine shipments, the Australian Financial Review reported on Friday, as the latest outbreaks have spurred a surge in people getting inoculated.

The prime minister’s office did not respond to requests seeking comment.

Australia’s two largest cities – Sydney and Melbourne – are in extended lockdowns while residents in the country’s capital city of Canberra woke up on Friday to their first strict stay-home restrictions in more than a year.

Despite the recent outbreaks, Australia still has far lower COVID-19 numbers than many other countries in the developed world, with just over 38,100 cases and 948 deaths.

In Victoria, 15 new local cases were detected, all of them in Melbourne, down from 21 on Thursday. Of the new cases, seven have spent time outside while infectious, the state’s health department said. Eleven are linked to the current outbreak.