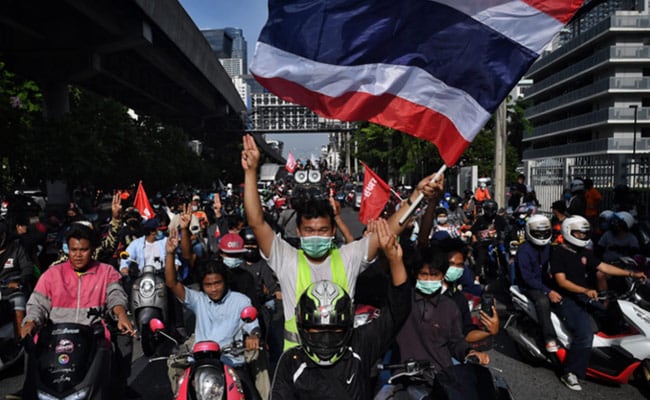 Riot police fired water cannons, rubber bullets and tear gas at protesters in Bangkok Tuesday as hundreds rallied for democratic reform and against the government’s handling of the coronavirus pandemic.

Demonstrators defied a ban on public gatherings as Thailand tries to quash its worst virus outbreak so far, with new cases hovering around the 20,000 mark daily.

The slow start to the coronavirus vaccination programme in Thailand and economic pain from restrictions and business closures has heaped pressure on Prime Minister Prayut Chan-O-Cha’s government.

Hundreds of protesters wove their way through Bangkok streets on motorbikes and in cars. By early evening there were clashes.

Two police traffic booths were set ablaze and some demonstrators threw firecrackers and fireworks at officers, who had earlier unleashed water cannons, rubber bullets, and tear gas on the crowd.

Protesters defaced a logo of Sino-Thai Engineering and Construction — a company with links to Public Health Minister Anutin Charnvirakul — with pig’s blood.

They also targeted the logo of King Power, a major duty-free company, over its perceived support for the government.

“The authoritarian Prayut Chan-O-Cha government continues to seek, allocate, and distribute benefits for the ruling class, allowing people to get sick and die on their own fate,” student activist Benja Apan told the rally.

Ahead of the protest, police warned demonstrators not to jeopardise public health by violating coronavirus restrictions.

He added six police were injured including one officer shot in the thigh with a homemade gun.

Erawan Emergency Medical Centre said there were no reports so far of protesters being injured.

Thailand’s Civil Court on Tuesday ordered police to “exercise caution” when performing crowd control duties but dismissed a motion from human rights lawyers asking for a ban on rubber bullet use.

A youth-led democracy movement that kicked off in Thailand last year drew tens of thousands of people to rallies demanding the resignation of Prayut, the former army chief who came to power in a 2014 coup.

The movement broke long-held taboos by demanding reforms to Thailand’s monarchy, and scores of protesters have been hit with multiple royal defamation charges, which carry 15-year jail terms.