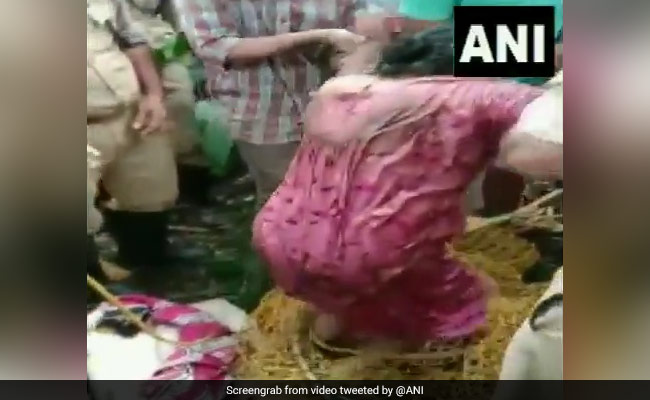 A woman was rescued from a 50-foot well in Kerala.

A rescue operation involving fire department officials and local residents was carried out in Kerala’s Wayanad district after a woman from the area fell into a well on Tuesday. The woman was pulled back to safety from the 50-feet-deep well using ropes and other equipment. A video of the rescue operation shows  fire department personnel pulling a large net with the woman inside it out of the well with help from onlookers. As the woman reaches the opening of the well, she can be seen holding onto the net she is sitting in. Asking her to let go of the net, the personnel pull her onto the land.

In the clip shared by the news agency ANI, the woman is seen falling back as she steps out of the net, presumably in a state of shock after the accident. However, as people around help her back to her feet, she can be seen walking. Along with the clip, the tweet attached said, “Kerala: Fire Department officials and locals rescued a woman after she fell into a 50-feet deep well in Wayanad (10.08).”

The video has gained over 7,800 views within hours of being shared, with several users praising the team.

#WATCH | Kerala: Fire Department officials and locals rescued a woman after she fell into a 50-feet deep well in Wayanad (10.08) pic.twitter.com/5tG6Jq0vx3

Reacting to the video, one user said, “Great work done by locals and officials.”

Rescue operations of any kind need to be supervised by officials and trained personnel. In the absence of proper guidance, such operations can go tragically wrong. An incident of this nature was reported in Madhya Pradesh’s Vidisha district in July when 30 villagers fell into a well during a rescue operation. Of these 11 people died in the fall, while 19 sustained injuries.

The villagers reportedly fell while trying to rescue a boy who had already fallen in the well earlier. Due to the sheer number and weight of the people involved, the parapet wall around the well had collapsed taking the villagers down with it.