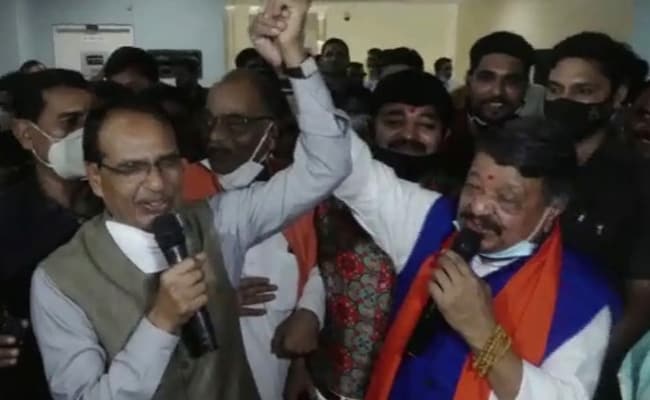 Ministers, MLAs from both ruling party and Opposition and journalists attended the “bhutta party”.

In visuals from the event that started doing the rounds on social media, the two BJP veterans were seen singing the quintessential friendship song from Sholay, “Yeh dosti hum nahi todenge”, and the melodious Kudrat number, “Hamein tumse pyaar kitna”.

Musical show of unity @ChouhanShivraj & @KailashOnline joined voices to sing “Yeh dosti hum nahi todenge” at a “bhutta party” at the Assembly building.MLAs from both the ruling party and @INCMP attended the party including Leader of the Opposition @OfficeOfKNath@ndtv@ndtvindiapic.twitter.com/4EallbzYNx

The soundtracks for the songs are heard playing in the background as a woman in the crowd helps the leaders with the lyrics of the songs.

The two leaders, looking visibly upbeat, sing one at a time before joining voices. At one point, Mr Vijayvargiya holds Mr Chouhan’s hand and raises it up in the air. Those in the group surrounding the leaders start humming too and putting their hands together to cheer the duo under the spotlight.

One visual shows the two leaders ending a song and then putting their arms around each other.

Sharing a clip of their performance on Twitter, Mr Chouhan tagged Amitabh Bachchan and Dharmendra, who played the roles of Jai and Veeru in the 1975 classic.

Mr Vijayvargiya shared the clip too, recounting that they would often sing this song during their Yuva Morcha days and added that the “Bhutta Party” duet helped revisit the memories.

Ministers, MLAs from both the ruling party and the Opposition and journalists attended the “bhutta party”. Leader of the Opposition and former Chief Minister Kamal Nath was also present and was seen sharing a light moment with Mr Vijayvargiya.